In the Sweet Midwinter 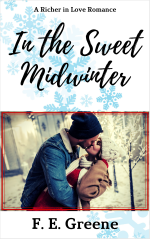 Deci Gillingham’s dream vacation is off to a not-so-dreamy start. Since childhood, she has wanted to visit England, but the reality doesn’t match the illusion. After losing her job halfway over the Atlantic, Deci copes with the shock by pretending to be a jet-setting heiress at a high-dollar Victorian dinner. She develops a crush on her waltzing partner and ends up renting a flat in his building. But Gus thinks she comes from money. What will happen when he finds out she doesn’t?

For Gus Richmond, honesty is the only policy. But is he being honest with himself?  He can’t seem to keep away from the starry-eyed American staying in the flat across from his. Deci is everything Gus doesn’t want in a girlfriend – and everything he does. Can he forgive her for pretending to be someone she isn’t? Will he admit that he’s falling in love?

Set in Oxford the week before Christmas, In the Sweet Midwinter celebrates two centuries of holiday traditions as Gus and Deci pursue their Christmas wishes in this story of family, love, and forgiveness. This sweet and clean novel is fourth in the Richer in Love series which can be read in any order.

What readers are saying…

“I love a book that takes me away from myself and allows me to escape the tensions of life for a while. This book does that in spades.” – Amazon reader (U.S.)

“The romance is sweet, characters realistic, and setting lovely. I loved getting a glimpse of previous characters, as well as meeting new ones, and seeing the development of those mentioned in Ms. Greene’s other works. I highly recommend this novel for those wishing to be ‘whisked away’ to a lovely story and place!” – Amazon reader (U.S.)

In the Sweet Midwinter is part of the Richer in Love contemporary romance series.

Click here to find out more about She Hates Me Not, book one in the series.

Click here to find out more about All of Your Business, book two in the series.